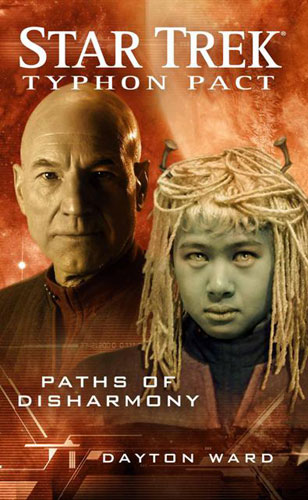 Reproductive issues that have long plagued the Andorian people are reaching crisis level. Despite the Federation's seeming inability to provide assistance and growing doubt over its commitment to a staunch long-time ally, Andorian scientists now offer renewed hope for a solution. However, many segments of Andorian society are protesting this controversial new approach. In response, President Nanietta Bacco has sent the Enterprise crew and a team of diplomats and scientists to Andor to convene a summit, in the hope of demonstrating that the Federation's pledge to helping Andor is sincere.

The fourth and final book in the Typhon Pact mini-series is the Next Gen focussed novel and departs from the practice of the first three books by dealing predominantly with a Federation member species, the Andorians. Their planet ravaged by the Borg and species threatened with extinction by reproductive difficulties, Andor plays host to a conference of scientists and politicians trying to find an acceptable solution.

To me, this is the adventure where the series of continuation novels has come of age for the next gen. The writers have the freedom now not to worry about putting the toys back in the box, and so events have lasting repercussions, granting the reader much more emotional involvement with the plot.

While some elements are clearly moving to set things into motion to fit back into the 24th century parts of the recent Star Trek film and it's accompanying literature, the characters are written in such a way that it feels a natural progression of their character arc. In this way, this book is far superior to it's predecessor, in which DS9 characters develop beyond recognition.

Although the story follows on from many of the events of the DS9 relaunch novels, and ties in with the TOS-era Vanguard series, there's no requirement to have read either to understand this action packed semi-political thriller. It's the best of the Typhon Pact novels and leaves plenty of room for Trek to continue for a long time. I look forward to finding out what happens next.