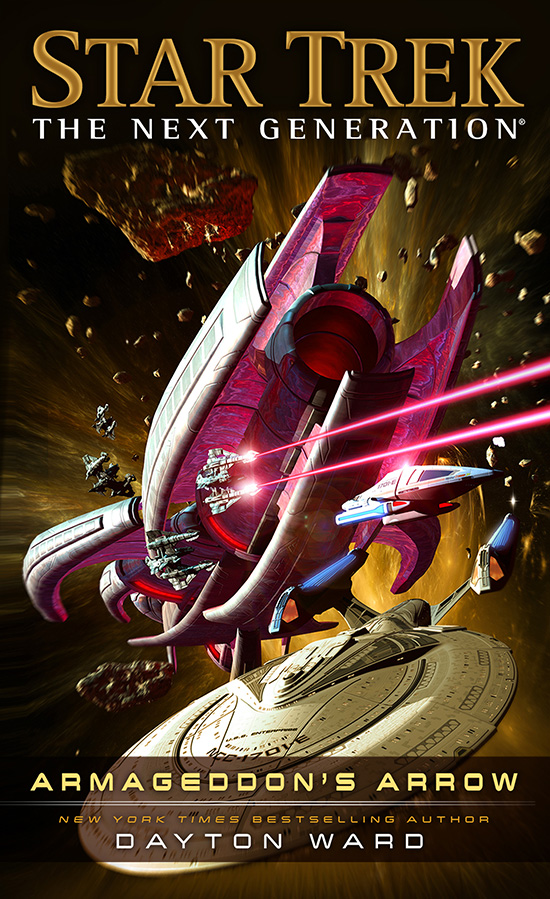 Approaching a star system with two inhabitted planets, Captain Jean-Luc Picard and his crew find a massive alien vessel drifting in interstellar space. Sensors detect life aboard the derelict - aliens held in suspended animation. Thought to be an immense sleeper ship, the vessel actually is a weapon capable of destroying entire worlds, the final gambit in a war that has raged for generations across the nearby system. Captain Picard is now caught in the middle of this conflict and attempts to mediate, as both sides want this doomsday weapon, which was sent from the future with the sole purpose of ending the interplanetary war before it even began.

The Enterprise E returns to regular missions after the novel continuity's recent upsets, and this does feel a lot like some of the older novels - much like an episode of the series rather than part of the ongoing story, and that's really great.

While investigating a potential first contact, the Enterprise comes across a drifting spaceship with a mysterious provenance, and the crew have to deal with the repercussions of this discovery on the local planets.

It's great to spend some time exploring something new, and Ward has created a fascinating scenario that allows him to plant a number of references to various of the TV series, follow up on a few of the new and old characters, and provides some real tension and intrigue.

As much as I love the ongoing arcs that flow through these books, it is nice to have one that's mostly stand-alone, and I'm glad that Ward had the chance to deliver this one. It's good to see one of my favourite crews back on the road again and I enjoyed travelling with them.