A Time to Harvest 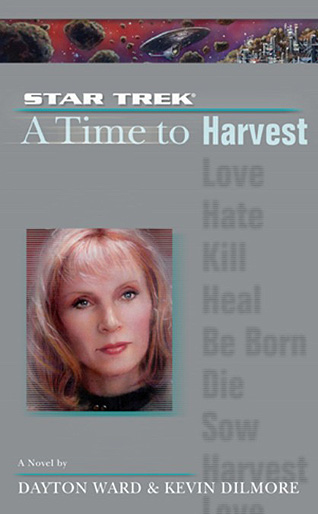 Centuries ago a hardy band of survivors, fleeing a planetary catastrophe, took refuge in the inhospitable asteroid belt. Now they must make a choice: to go on as they are on the crowded but functional asteroids or to give up all they have worked for in a desperate plan to rebuild their dead home planet.

The second half of this duology is a slight improvement on the first, containing more action and a plot that moves more quickly. It's also easier to follow as we are aligned with both parties this time from the outset and can understand what's going on from both points of view.

One thing I've noticed and am ambivalent about is that the authors like to drop in references to a lot of prior events in the Star Trek continuity, but then take up a couple of paragraphs explaining it in a little too much detail. In one or two places this is justified where it is essential to the plot (or, I suppose, filling in the reader on events of the first book - although why would you read the second part without reading the first, and both were published simultaneously so it's not like you could have forgotten...) but in others it seems a bit of overkill - why not just leave the references as an added bonus for those that will get them and let everyone else gloss over them? Instead I have a couple of paragraphs that I end up skipping over because I know what they are telling me.

The main thing that I dislike about this book though is the way it seems to be forced to build in the direction of the film Nemesis. Yes, I know that the entire point of this series is to fill the gap between Insurrection and Nemesis, but there are really irritating parts, particularly having to explain how Data lost his emotion chip, that I really wish these novels could have done without.

I'm hoping that the rest of this series will have slightly less introspective characters. Picard, La Forge, Crusher all seem to have been fairly grumpy in this one, which gets a bit over the top when it happens over and over again. Having said all the above, I still enjoyed reading this.