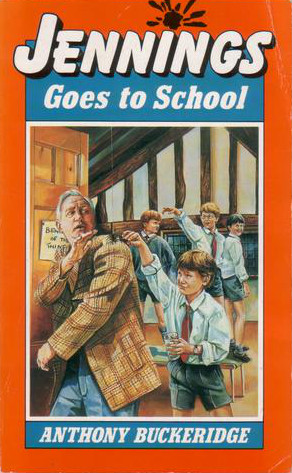 In this first book in the series, Jennings and Darbishire arrive for their first term at Linbury Court School. But no one could have been prepared for the hilarious trail of muddle and mayhem that follows Jennings wherever he goes.

A short while ago I discovered that the series of 18 Jennings novels that I read as a child in the early nineties were not, in fact, the entire story, and there were 6 novels missing from my collection. So I've dug out the books from the loft and have set to re-reading them all, in the original publication order.

JCT Jennings is the standard for any boarding school literature. Set in the 1950s, but easily mistakable for more recent times (unless my 1980s edition has been doctored), this book charts Jennings' and his new friend Darbishire's first term boarding at Linbury Court.

My only complaint is that my copy has been edited into 1980s - prices are quoted in decimalised pence, rather than shillings as would befit the original era. I felt rather let down by this as a bit of history would not have gone amiss in a children's book.

The characters and school were instantly familiar as I read this, as were the storylines in this first book. In fact reading it again prompted the image of the school and it's layout exactly as I used to imagine it to pop right out, probably assisted by it's similarity in my mind to my own primary school.

One thing that I do not remember noticing before is that the tone of the narration is aimed at adults as much as children. The impression I get is that Buckeridge wanted to some extent to demystify the idea of boarding school for potential future pupils, and so the narration goes out of it's way to explain aspects of school life. An example would be explaining that although the school meals are referred to as 'muck', everyone still goes for second helpings. Reading again as an adult it seems cleared that this is aimed more to reassure parents than entertain/inform children.

My only other criticism is one that I think I had spotted before, which is that although Jennings is a new starter, aged only ten, he is straight away in Form 3 and taking classes with students who have been there much longer than him. Perhaps this is how boarding schools worked but it seemed a little out of place to me.

All in all though it was a good reread. As funny as I remember, although it lost a little because it still felt very familiar - I'm hoping the rest of the series will be less well remembered so I can enjoy them more.