The Trouble with Jennings 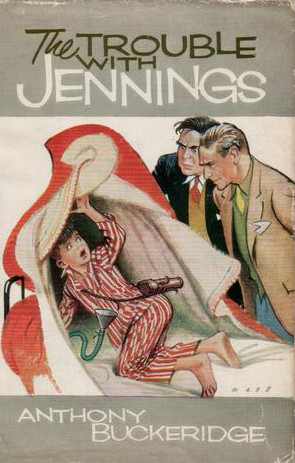 According to Mr. Wilkins, the trouble with Jennings was due to the fantastic way in which his mind appeared to work. Mr. Carter took a more tolerant view, but even so, his contention that the boy meant well was sorely tried by the events of the Easter term. There was, for example, the home-made snorkel which caused a flood, with disastrous results to the music room ceiling: there was a mix-up over a birthday present which threatened to shatter the lasting friendship between Jennings and Darbishire.

I'm pleased to discover that the Jennings books that I didn't manage to read as a child can manage to make me giggle in adulthood. This is another delightful tale of misunderstandings between schoolboys and their teachers at Linbury Court school.

This is actually one of the best of the series in my opinion, which makes it slightly surprising that it was not one of those chosen for reprinting in the 1980s. The story is framed around Jennings' new year's resolutions, and with the best of intentions the eleven-year-old schoolboy still manages to get into Mr Wilkins bad books.

Buckeridge had a special talent for writing about young boys and the differences in the way their minds work from the typical adult occupants of the world, and he tells a story that will, I think, still appeal to children and adults today.