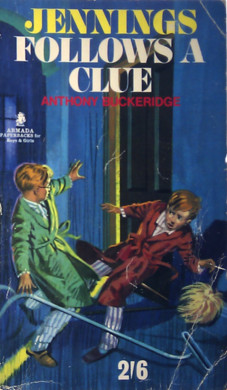 When Jennings is inspired to take up a career as a detective, with faithful Darbishire as his assistant, trouble is bound to be just around the corner. Their first mission - to recover a 'stolen' sports cup, is the first of several bungled attempts to imitate super sleuth Sherlock Holmes. But the detective duo face their most perilous adventure yet when they make a nocturnal visit to the sanatorium and discover that they are not alone. An intruder is at large, but a missing coat button is Jennings' only clue.

By the second book in the Jennings series he has settled in at Linbury Court and while still slightly an outsider from the gang he's certainly no longer being treated like the "new boy". After Mr Carter reads him a Sherlock Holmes story, Jennings decides to form the Linbury Court Detective Agency, and sets out to investigate the mysteries of the stolen sports cup and the light in the sanatorium.

This edition has stuck to the original text, rather than others I've read which have (for example) converted money into decimal coinage. I don't think it detracts from the story in any way and for a young reader would be a good opportunity to learn about how things used to be. It's a funny read. A lot of the humour comes from the misunderstandings that occur as Jennings tries to explain things, particularly to Darbishire, and the way the characters tend to take everything very literally, something that children will still appreciate now.

The choice of language is also very much of the time, and in some places feels a little over the top - too much 'whizzo' does start to get on the reader's nerves. Although a child of a later era, I don't think we ever used that much slang to interject our speech. There are also a surprising number of more complicated words - whether they have just fallen out of fashion, or whether they are included in an attempt to aid the growth of the young reader's vocabulary I am unsure, but they may require explanation to a reader who has not encountered them before.

The plot in this book is actually rather better constructed than I remembered, with a lot of the earlier elements coming back to tie in towards the end. This surprised me as from having just re-read the first book (Jennings Goes To School) I was expecting a few loosely connected incidents rather than a solid story running through.

Overall I have enjoyed reading this one again - I certainly remember it less well than the first novel which added to my appreciation. I'm now looking forward now to 'Jennings' Little Hut', as it is one that I never read as a child.