Leave it to Jennings 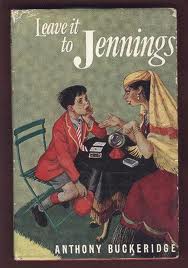 Leave it to Jennings is the last new Jennings story I will ever read - having already read all the following stories when I was a child. It's taken me some time to get hold of a copy, as it seems it's the only book in the series that hasn't been republished any time recently and all the second hand copies are surprisingly expensive, so I suppose actually it's taken me the time to convince myself to pay for a copy, which I finally did earlier this year on a visit to Hay.

I've taken my time reading it, partly to savour it and partly because I didn't want to carry it around in my bag do have been taking it of the shelf just for a chapter or two at a time.

Overall, it's a pretty average Jennings story, depicting several episodes from his days at boarding school along with a throughrunning story of an inter-dorm competition and some prophecies received from a village fete fortune teller.

In general the plot is pretty tame and in places quite predictable, but maybe that's okay in a children's story. I couldn't see any particular reason that it would have been left out of any republishing, but maybe it's just because it didn't stand out in any way that it's never been picked.