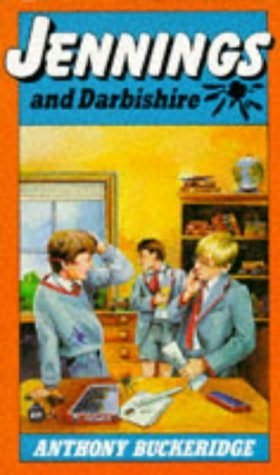 Jennings turns journalist when he receives a printing kit for his birthday, and dubs himself Editor of the Form Three Times. Enlisting faithful Darbi as his assistant hack, Jennings sets off to the cove, where a French fishing vessel is moored, for their first story. But when their dreadful French ends in the unwelcome gift of a parcel of raw fish, the worse place they could hide it is in Mr Wilkins chimney!

The fourth book in the Jennings series seems to lose its way slightly compared to its predecessors. The plot focusses on the chaos that ensues after Jennings receives a printing kit for his birthday and starts his own newspaper. The fact that it has been titled 'Jennings and Derbyshire' rather than 'Jennings' Newspaper' already suggests how weakly the plot will hold together.

My copy was, once again, a 1980s updated version, with decimalised currency replacing the original, but strangely leaving a little casual racism.

The first section, while once again involving fish (which I'm not very keen on) was funny, with twists that I didn't spot coming even though I've read the book before. The middle section was less so, being almost awkward in places but still believable. The final section though seemed out of place in the storyline and a little bit forced.

Don't get me wrong, I still think that the Jennings books make fantastic reading, but this certainly wasn't the best in the series.