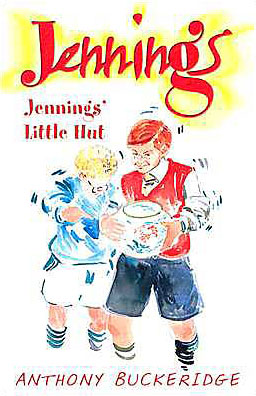 The woodland at Linbury Court becomes squatters' territory when Jennings comes up with the idea of building huts out of reeds and branches. Jennings and Darbishire are thrilled with their construction, which even includes a patented prefabricated ventilating shaft, a special irrigation drainage canal and a pontoon suspension bridge!

But things can only go horribly wrong for Jennings when he is put in charge of Elmer, the treasured goldfish, and even worse when the Headmaster pays the squatters a visit. And if Jennings thinks that a game of cricket will be far less trouble, he's going to be knocked for six!

I was quite excited by the prospect of Jennings' Little Hut - the first Jennings book that's new to me (though not itself new) for about 18 years. Why this was not in the released set I bought as a child, I really don't know. I was not disappointed.

My first assumption had been that the little hut in question would be a garden shed type of affair, but instead it turned out to be a homebuild made with reeds. I found this fairly hard to picture, and thought the book would have been improved by some good illustrations. My eighties versions at least had cover pictures which would have depicted the hut.

The plot covers about three storylets - about typical for this series - though each revolve around the hut in some way. The first I found quite difficult to read, but only because its focus is a goldfish, of which I have a minor phobia.

Another thing I was a little displeased by was hat the text in my copy was the updated 1980s text, which jars a little with the setting. There are a couple of places where he changes are obvious (recurrences to dates and currency) but beyond that I don't know where the differences lie.

Apart from these things I really enjoyed having some 'new' Jennings material to read, the jokes were still fantastic, the misunderstandings classic and the writing genius. It does away with an issue I experienced in the past as it explicitly explains what class Jennings is in and how long he has been at the school, which is something I had previously felt lacking.

I'm really glad that I've started rereading these and finding the books I missed. I would recommend these to anyone as the best of children's fiction.