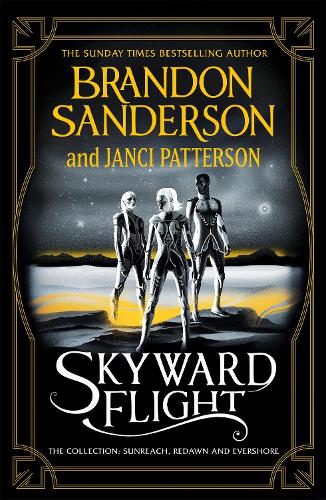 In Sunreach, after a planet-destroying Delver suddenly appears in the sky of Detritus and vanishes just as suddenly, FM knows that the last free human society got lucky. Her Skyward Flight companion Spensa figured out how to draw this Delver away, but it won't be so easy next time. Humanity has to be prepared.

In ReDawn, Alanik has recovered from the shock of answering a distress call and finding a planet of humans making a stand against the Superiority, only to be dismayed to discover they're considering a peace overture from their enemy. Worse, when she returns to her home planet of ReDawn, she find her own people falling into exactly the same trap. With her mentor captured, she turns to her new friends to help: can Alanik, FM, Jorgen and Rig coax an ancient technology into life in time to save both their planets from disaster?

And in Evershore, the government of Detritus is still in disarray following Superiority treachery, and no word has come from Spensa, on her mission deep in the Nowhere, leaving Alanik, Jorgen, FM and Rig to pick up the pieces. So when the Kitsen send word from the planet Evershore, saying they have some humans and wish to return them, they have to decie if the strange message can be trusted.

A shorter step back into Brandon Sanderson's Skyward series with this first of three novellas co-authored by Janci Patterson, focussed on secondary characters who don't get focus time in the main novels.

This one follows FM, a pilot, as she goes about her daily business of flying battles and investigating slugs, roughly in parallel to the third main novel.

It took me a few chapters to get back into the swing of the universe, but once there I was just as, if not more, hooked by the narrative. There's a subtly different tone to the writing I think which makes it easier to read, less choppy perhaps, and I'm not sure whether this is because of the shared authorship or a deliberate stylistic choice because of the change of focus character.

It'll be really interesting to see how the subsequent two novellas compare.

The second of Patterson and Sanderson's novellas set in this universe, we follow the story from a new cultural point of view.

As well as providing a new insight into known characters and factions, this provides for a fascinating bonus piece of world-building as we see an alien culture up close with many differences from the humans we've otherwise spent time with.

The plot surprised me this time by feeling far more integral to the overall storyline of the series. I was expecting these novellas to just be supplementary, but this really feels like it's necessary reading, and that everything here is going to come to affect the final novel.