The Autobiography of Kathryn Janeway 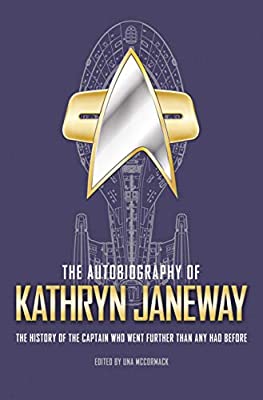 Kathryn Janeway reveals her career in Starfleet, from her first command to her epic journey through the Delta Quadrant leading to her rise to the top as vice-admiral in Starfleet Command. Discover the story of the woman who travelled further than any human ever had before, stranded decades from home, encountering new worlds and species.

I’ve kind of ignored the autobiography series of Star Trek novels until now, because I’m generally a fan of the Pocket Books novel series, and these are published by Titan. However the lure of Una McCormack as the ‘editor’ drew me to get this, the Kathryn Janeway entry in the series.

The book contains a first-person set of reflections on what’s probably one of the most interesting lives in Star Trek. Many anecdotes from the character’s childhood are contrasted with events from the TV series, and the years spent lost in the delta quadrant are covered with an interesting take of nostalgia mixed with some commentary that we wouldn’t get in a different format.

McCormack’s details of the personal thoughts of Janeway are the most delightful aspect of the book. There are a lot of little comments which show a great deal of thought, references that reflect upon our 21st Century lives (and I’m sure some that I missed!), and moments designed to add new levels of depth to the character that’s only possible in this memoir format.

My only disappointment was that I felt it wrapped up too abruptly. I was hoping to see more about what happened for the character after the end of the TV series, but the details here are few, and it almost felt as if the character’s view was that life was more mundane from that point forward. However it’s plausible this was done intentionally, because we now know that Janeway’s television story is not yet complete, and the book might have wanted to avoid being contradicted by canon too soon.