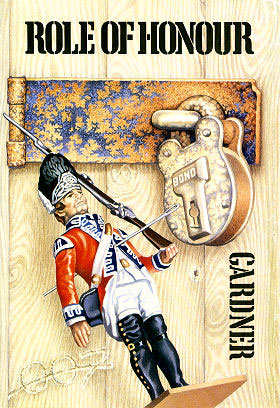 Abandoning his 007 status, James Bond resigns from the service and heads for Monte Carlo, in search of a new role of honour. But he quickly finds himself embroiled with a computer wizard absconding from the Pentagon and a sinister mercenary army.

John Gardner's fourth James Bond novel sees a slight change of direction for the author. It's a much more Fleming-esque novel with an epic-scale plot but a perfectly believable enemy, and a number of touches that follow the style of Bond's original creator.

That said, there are a number of aspects that don't work - Gardner borrows Fleming's technique of describing his characters playing a game - however Bond facing his enemy head to head over a game of (essentially) Warhammer doesn't quite have the gravitas that Fleming managed to put into a round of golf or a game of cards. Gardner's descriptions aren't as gripping either - whereas Fleming could write the most entertaining hand of cards ever played.

The book is tied very much to eighties technology, and suffers for a modern reader because of this, much more so than the original series, much of which maintains a timeless quality. Bond spends a considerable period learning about computers, and it seems implausible that he could become an expert so quickly, and though the tech seems particularly accurate it is hard to relate to now.

However the action is good, the storyline moves along at a good pace and explores areas that suit the character well. There is a lack of exotic locales, but this almost helps to ground things a little more in reality than in some of Gardner's earlier episodes. The character of Bond is explored a touch more deeply, though he still doesn't seem as detailed as under Fleming's penmanship - his feelings aren't focussed on, and his emotions come across a little strangely.

Overall though, probably the best of Gardner's first four, and I hope that this bodes well for the rest of his contribution to the series as I continue reading.