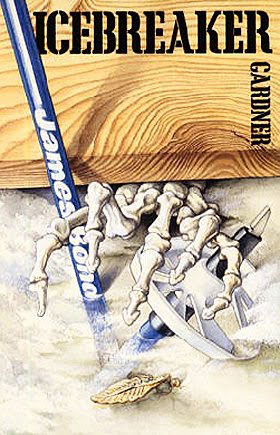 Bond reluctantly finds himself recruited into a dangerous mission involving an equally dangerous and treacherous alliance of agents from the CIA, KGB and Mossad. The team, dubbed "Icebreaker", waste no time double-crossing each other. Ostensibly their job is to root out the leader of the murderous National Socialist Action Army, Count Konrad von Glöda. The Count used to be known as Arne Tudeer, a one-time Nazi SS officer who now perceives himself as the new Adolf Hitler.

John Gardner's third outing as Bond author brings us a novel that has a slightly more cinematic feel to it, in which Bond is invited to join with counterparts from foreign powers to counter a neo-nazi terrorist group.

While the plot does feel like a Roger Moore movie, there are moments, particularly at the beginning, where Gardner seems to start trying to emulate some of Ian Fleming's writing style. I'm not sure whether this comes across successfully or feels more like a parody.

For the most part the plot is plausible and the sequences in the snowy outdoors feel well written. It seems clear that the author knows here exactly what he's talking about. However there are other aspects, particularly regarding many of the guest characters, which (without spoilers) over-complicate things and make the book feel like it is taking the mickey out of the spy genre.

In many places I found the book hard going, my eyes would glaze over and my mind wander, and I would have to go back a page or two to find out what was going on. I'm afraid I still haven't found Gardner's writing up to the standard that I loved in Fleming's books.