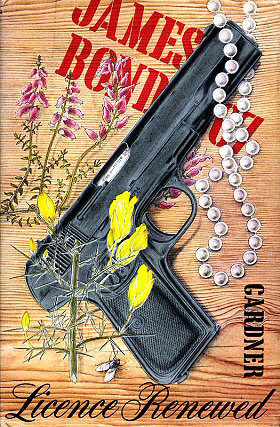 Bond has been assigned to investigate one Dr. Anton Murik, a brilliant nuclear physicist who is thought to have been meeting with a terrorist known as Franco. Together they plan to hijack six nuclear power plants around the world and start a global meltdown, unless Bond can stop them...

Licence Renewed is the first James Bond novel by John Gardner after he took over as continuation writer for the series in the early 1980s. It's very different from the works of Ian Fleming and previous continuation writer Kingsley Amis who did a passable attempt at replicating Fleming's style.

Gardner begins with an attempt to bring Bond and his world up to date (to the eighties) involving the introduction of new characters, vehicles and explicitly changing some of Bond's characteristics. Then Bond heads to Scotland to investigate a nuclear physicist's suspicious dealings with a known terrorist.

Considering this as part of the wider series, it seems that Gardner has made a conscious decision not to base his writing on Fleming's. There's much less of the character of Bond - one of the highlights of the original novels - and more made of the action and gadgetry, much like the movie version of James Bond. A few aspects are nodded to gently, but they feel out of place. It's not a Bond novel that fits with what's gone before, and could easily have been about a new character rather than continuing the brand.

That aside, the book is a reasonable adventure in its own right. The action is fast paced (once the opening exposition is dealt with) and the plot is well thought through and executed. There are a few too many of the typical James Bond clichés - generally it seems closer to a movie plot.

Overall though Gardner's writing is better than I remembered from reading some of his later Bond novels as a teenager. I'll definitely be including the rest in my re-read of the series.