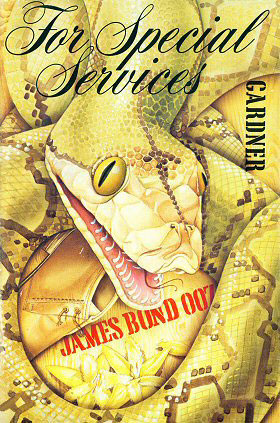 Bond is back on secret loan to the US government and primed to confront an old and deadly adversary which now has a sinister new leader and a devastating operation underway. In partnership with the daughter of his old friend Felix Leiter, Bond experiences the deadly force of SPECTRE's new power.

The second of John Gardner's James Bond continuation novels sees the secret agent dispatched to America to investigate an apparent resurgence in an old enemy. It's a clever move to delay the reintroduction of this element until book two, so that the new series doesn't feel too much like a rehash, however it also felt a little like they returned because it wasn't thought the book would sell well enough with a new enemy.

Despite a number of faults I thought the story was better than its immediate predecessor, and the plot at least felt much more like those Fleming wrote. Chief among the drawbacks however was the characterisation. Bond is bland and almost feels elderly in places (a bit like Roger Moore who was the cinematic Bond at the time), which makes the romances with much younger characters implausible. The other characters however were shallow and even the female lead seemed to have only one trait - falling for Bond.

I had read the book before but had no conscious memory of the plot, so I'm not sure whether one important plot point was obviously coming from a mile off or if I had subliminally remembered it, however I felt that a few more red herrings would not have gone amiss. the biggest problem though was the repeated use of dei ex machina - the sudden production of a tool or additional knowledge or secret events that the reader is introduced to just when it's needed to rescue the plot, and mostly things which could easily have been foreshadowed earlier.

Overall, it's a fairly good adventure, but it would have worked with any agent and any enemy - there was a good use of Bond's backstory and references to a number of Fleming's works, but it all felt like window dressing. Not quite up to the standard I look for in a James Bond novel.