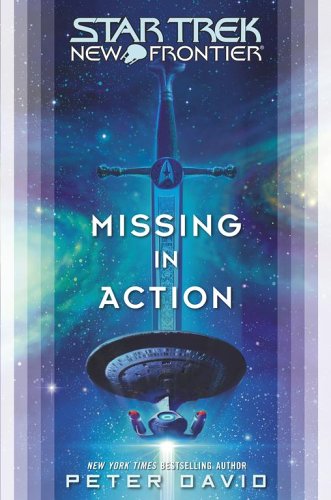 The crew of the USS Excalibur are lost in space, somehow thrown headlong into the mysteries and dangers of the distant Andromeda Galaxy - and no sooner do they arrive than they are caught up in the middle of a genocidal interstellar war. Now, Captain Mackenzie Calhoun must decide where his true loyalties lie.

Nothing special. I've been going off New Frontier over the past few books, and this one I didn't even buy until it was in paperback and it's taken probably a couple of years to get around to reading it. Part of that was because I was re-reading the series to remind myself what had happened, but still...

Even when I got this far, I wasn't keen. The previous book in the series, 'After the Fall', didn't impress me, and finding the entire New Frontier universe mangled with in the three year storyline gap preceding 'Fall' with no real explanation led to some confusion.

And another thing... the previous novel in the series ended on a cliff-hanger, with the Starship Excalibur being pulled through a vortex into another realm... so I suspected that this may be irritatingly similar to the previous book I read 'Titan: The Red King'.

In fact, it wasn't as bad as I had imagined, and was a fairly enjoyable romp, although I feel the central part of the New Frontier series - Captain Calhoun and the USS Excalibur = has been watered down too much by spreading the cast around three ships, a starbase and a planet.

Once again, Peter David's knack for failure to put the toys back in the box has presented itself, which is refreshing compared to many Star Trek stories where the tension is somewhat lost by the knowledge that everyone has to survive.

I was disappointed by the ending of this one though. Everything was wrapped up a little too quickly and cleanly at the end, almost as if the author had given up on the story and quickly put together a conclusion.