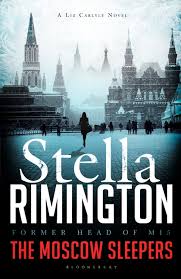 A man lies dying in a hospital in upstate Vermont. The nurses know only that he is an academic at a nearby university but they have been instructed to call the FBI should anyone visit their patient.

News of this suspected Russian illegal soon reaches MI5 in London where Liz Carlyle has been contacted by a top secret source known as Mischa who is requesting a clandestine rendezvous in Berlin.

Meanwhile in Brussels a Russian sleeper agent who has lived undercover for years is beginning to question his role, while suspicions have been roused about a boarding school in Suffolk that has recently changed hands in mysterious circumstances.

The tenth Liz Carlyle novel sees the increasingly senior MI5 officer back in contact with a Russian source, who points her in the direction of a complex plot against the UK and its allies. There’s quite a lot going on across multiple countries and it’s interesting to see how the author balances these in a way that doesn’t affect the flow of the narrative.

I enjoyed seeing some more of the relationships between the recurring characters - it’s been quite fun seeing how they’ve grown since the early novels, and unlike some authors they haven’t been left as recurring stereotypes in each episode.

One of the things I’ve always enjoyed about this series, which continues here, is the realism - there’s no sense of the overly dramatic - instead the tension is applied through the subtle believability and the authentic way that the author portrays the goings on in the shadows - there’s no sense in reading it that the events couldn’t actually have happened.

Another solid entry in the series, and I look forward to more to come.