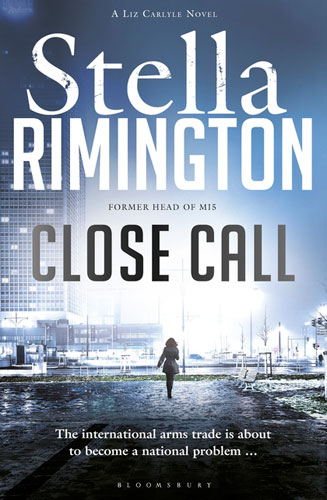 In 2012, in a Middle Eastern souk, CIA agent Miles Brookhaven was attacked. At the time he was infiltrating rebel groups in the area. No one was certain if his cover had been blown or if the act was just an arbitrary attack on Westerners. Months later, the incident remains a mystery. Now, Liz Carlyle and her Counter Terrorism unit in MI5 have been charged with the task of watching the international under-the-counter arms trade. With the Arabic region in such a volatile state, the British Intelligence forces have become increasing concerned that extremist Al-Qaeda jihadis are building their power base ready to launch another attack. As the pressure mounts, Liz and her team must intercept illegal weapons before they get into the wrong hands.

I'm surprised to find this is the eighth Liz Carlyle novel by real life MI5 head Stella Rimington, who lends a strong sense of reality to proceedings that other authors miss in an attempt to write a thrilling story. I thought this was a really good book that tells a strong, authentic tale, and is probably the best in the series.

The characters in the series clearly grow from book to book, rather than stay the same throughout the series as is the case with some long-running characters, and this adds a sense of realism to their lives. The main character does come across a little too perfect though - everyone seems to love her and there’s not a hint that she’s anything but perfect. There are some good character moments in the book however and it takes things places I really wasn’t expecting, which was good.

As usual, the plot isn’t incredibly action heavy and is quite tied to the concept of a procedural security service story. There’s a lot going on though, and we follow the characters as they learn more about a terrorist threat - unlike some books, we’re not presented with the enemy’s point of view, so we get the surprise as we travel through the narrative alongside. It’s a really interesting look at how terrorism is countered, probably far more than we realise, and there’s nothing here that I can’t honestly believe possible in the real world.

I read the book in just two days (aided by some long train journeys) and it’s kept me really entertained throughout. Definitely one of the strongest in a good series, and I hope I can look forward to more to come.