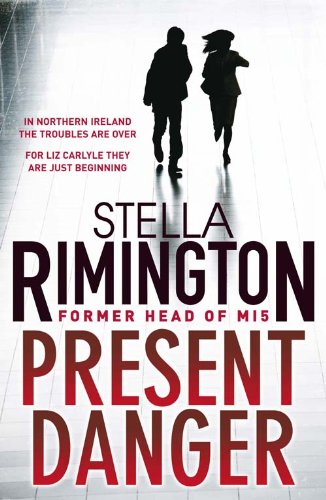 In Belfast, Liz and her team are monitoring the brutal breakaway Republican groups who never accepted the peace process and want to continue their 'war'. Intelligence is focused on the shady Fraternity, with links to drug-running, arms-dealing and organised crime. With some help from Special Branch and a volunteer informant who seems to be legit, the Fraternity's leader is identified as a cold, calculating and ruthless American, hijacking the Cause for his own financial ends.

In Dame Stella's fifth Liz Carlyle adventure, the MI5 agent is dispatched to take over in Northern Ireland, where a confused gang of American, French and Spanish criminals, pretending to be Irish Republicans, kidnap one of her agents.

I've enjoyed reading this novel more than the last couple in the series - the writing style seems to have improved a lot, although there are one or two moments that grate (two characters have wives named Moira just a few pages away from one another). The character of Liz is very realistic, but the other characters don't seem to have been given quite enough depth, including the baddies whose characterisation doesn't quite seem true to their motives.

The book moves at a good pace, and I absolutely love the level of detail that the writing goes into at some points. My favourite parts of these books are where the A4 teams tail suspects - it's so believable (presumably helped by Dame Stella knowing exactly how it's really done!) and her descriptions are some of very few that manage to translate themselves into images in my head. These A4 scenes are ones that I could really see in a cinematic form.

Overall, better than what I've been reading recently, and I am definitely looking forward to the next.