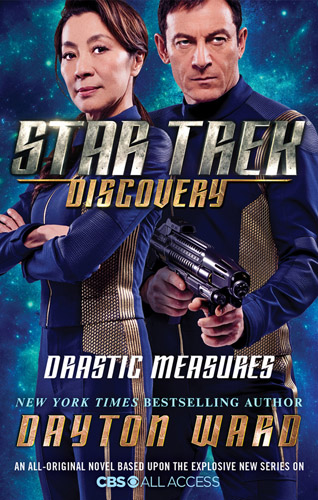 It is 2246, ten years prior to the Battle at the Binary Stars, and an aggressive contagion is ravaging the food supplies of the remote Federation colony Tarsus IV and the eight thousand people who call it home. Distress signals have been sent, but any meaningful assistance is weeks away. Lieutenant Commander Gabriel Lorca and a small team assigned to a Starfleet monitoring outpost are caught up in the escalating crisis, and bear witness as the colony’s governor, Adrian Kodos, employs an unimaginable solution in order to prevent mass starvation.

The second novel based on the new Star Trek television series, Discovery, is set some ten years before the series and gives an insight into the backstory of two of the secondary character - Philippa Georgiou and Gabriel Lorca. Serving in Starfleet as Commander and Lt. Commander respectively, the two officers’ paths cross when a (later infamous) famine breaks out on a distant colony world after crops are infected by a deadly fungus.

I think this is a really good story, better than the previous novel, using these side characters really well to tell a tale that provides extra context, but not interfere with the direction that the television series is taking. It also of course provides an opportunity to tie elements of Discovery in with events mentioned in other series.

It’s hard to say a lot about the plot itself without dropping in spoilers for this novel or the first season of the television series (the book is intended to be read after season one, I think, through after episode 12 should be fine). My memory of some of the elements referenced was a little rusty, which I think helped build some tension as I couldn’t remember what had been established in canon, though also distracted as there were elements I had mis-remembered.

A good novel to tide me over until there’s some more Discovery on TV.