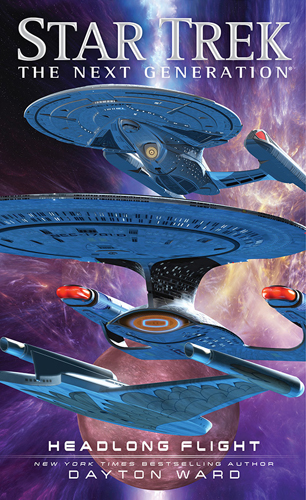 Surveying a nebula as part of their continuing exploration of the previously uncharted Odyssean Pass, Captain Jean-Luc Picard and the crew of the Starship Enterprise encounter a rogue planet. Life signs are detected on the barren world's surface, and then a garbled message is received: a partial warning to stay away at all costs. Determined to render assistance, Picard dispatches Commander Worf and an away team to investigate, but their shuttlecraft is forced to make an emergency landing on the surface, moments before all contact is lost and the planet completely disappears.

After the second half of 2016 focussed on blockbuster trilogies to celebrate the 50th anniversary of Star Trek, it was nice to get back to a simple, stand-alone adventure for the crew of the Enterprise. Or not that simple in-fact, because in this novel (as the cover strongly implies) there are two Enterprises.

This book is very much a stand-alone, and it felt a bit weird returning to that headspace after such grand adventures. I kept expecting something earth-shattering to occur to change the direction of the whole series, and felt a little bit let down by the story that perhaps didn’t have quite that resonance.

On the other hand, being a stand-alone meant that Ward was able to do some fascinating things with the characters, and show us some of the things that might have happened on the Enterprise-D. It was good to spend some time with some other familiar characters and to see the effect that the two crews had on each other.

Overall, this story read like a good episode of the TV series. And what more can you ask. It’s was contained, entertaining, and showed some interesting variety. A happy diversion to read.