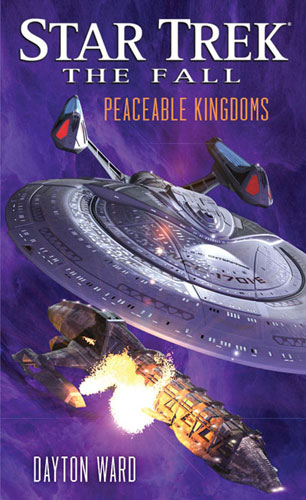 The Federation takes the first hopeful steps beyond the uncertainty and tragedy that has overshadowed recent events in the Alpha Quadrant. Even as elements of the Typhon Pact have been implicated in a devastating attack against the Federation, William Riker holds key knowledge of the true criminals.

The final book of The Fall - the 'event' mini-series that's rounded off the 2013 catalogue of Star Trek continuation novels - wraps up everything that's been building over the past few novels. The book follows two of the regulars in particular: Doctor Crusher as she's sent undercover to meet a Cardassian under mysterious circumstances, and Captain Picard as he's left on the Enterprise.

As a single story, it felt surprisingly small compared to the scale of the previous books in the series. The narrow focus on Crusher was interesting as she's an underserved character, but I missed some of the other characters and was expecting more of an ensemble piece to round out the series.

The author uses a lot of flashback to fill in what happened in previous novels, and to add backstory that we've not been aware of so far, and throughout the novel this feels very awkwardly presented and disrupts the flow of the narrative.

The political thriller feel of previous novels in the series lent a lot of depth and this felt more like a military thriller - you knew these things were happening elsewhere but it felt like they were unimportant and secondary. I understand that the publisher's plans for the future of the series are to depart from the more connected political universe of recent years' Star Trek novels, and I for one will be disappointed if this is the case.