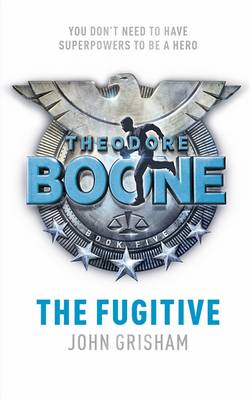 Theodore Boone - teenage lawyer and courtroom hero - is on a class trip seeing the sights of the capital city. But he hadn't counted on seeing the most wanted man in the history of his home town, Strattenberg.

Suddenly Theo is caught in the hunt for an accused murderer, alongside the FBI. Theo knows he's getting in deep - and things could become even more dangerous. Because if this case goes back to court, it will be down to him.

After something of a break, legendary author of legal fiction John Grisham returns to his young adult series about a thirteen year old boy who thinks he's a lawyer.

This book is very much a sequel to one of the earlier novels in the series, and after an educational trip full of cliches and embarrassing moments of social commentary that you'd not get from a British author, feels like it retreads the story of that earlier novel without a good reason.

Theodore is shown to be growing up and gradually mellowing from the I realistically goody-two-shoes attitude he displayed in the first few books, but he still comes across as time displaced and out of touch with the modern era. He's certainly not presented in a way that will make him appealing to anything but the most cerebral young reader.

Overall, disappointing that Grisham couldn't do something a bit more original, and a little follicular based on coincidence rather than the action of the characters. The idea behind the series is a really interesting one, but it feels like the author is so far removed from modern youth that it just isn't quite believable.