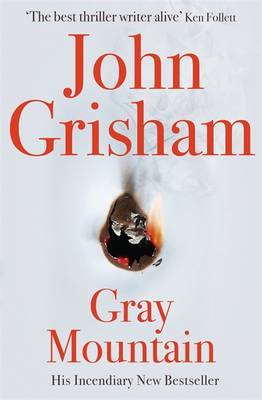 One week ago, Samantha Kofer was a third-year associate at New York City's largest law firm. Now she is an unpaid intern in a legal aid clinic deep in small-town Appalachia. When Lehman Brothers collapsed, she lost her job, her security, her future. As she confronts real clients with real problems, she finds herself a world away from her past life of corporate fat cats and fatter bonuses.

This is coal country. Meth country. The law is different here. And standing up for the truth means putting your life on the line.

Gray Mountain is the first John Grisham book that I've read on publication, having caught up after some five years of reading through his back catalogue in publication order. I was wary going in because the title used 'Gray' in the UK edition rather than being translated into 'Grey', but it turns out it's a proper noun, so okay.

The story follows a young lawyer who loses her job at the typical big New York firm in the 2008 financial collapse. She's told to do some voluntary work for a bit, and heads off into the mountains to help out at a clinic providing legal services for those who can't afford them.

As a story, it comes across as a little preachy around the ideas of big business and particularly the coal mining industry, but I suppose that's part of setting the scene. The plot is solid and multi-stranded rather than having the single focus of some of Grisham's books, but ultimately it does nothing new - nothing that makes this stand out from the array of previous legal thrillers that I've read, and ultimately it ends without giving a satisfying feeling that you've seen the tale through.

Mixed feelings overall about this book. I certainly enjoyed reading it, but it doesn't stand out from the Grisham canon as anything special.