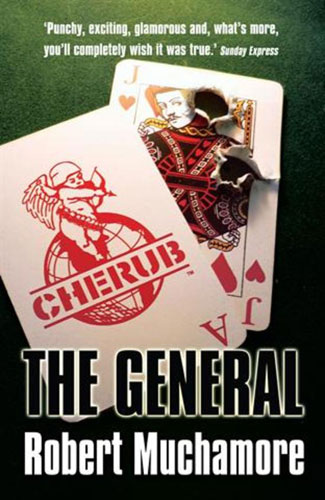 The world's largest urban warfare training compound stands in the desert near Las Vegas. Forty British commandos are being hunted by an entire American battalion.

But their commander has an ace up his sleeve: he plans to smuggle in ten CHERUB agents, and fight the best war game ever.

The tenth book in the best young adult series I've read sees its characters continuing to age realistically - James Adams is now a 17-year-old secret agent and on his way to retirement, while his younger sister is at her peak. This is an interesting twist on the series as it doesn't follow the traditional spy novel formula, instead mixing together a couple of plots to produce a meta-adventure.

The thing I enjoy most about this series is that it deals with real issues that are appropriate to the age of the characters and intended readers, without being patronising or trying to hide aspects of reality, and it manages to combine that with the fantastic world of secret agents and thrilling adventures. The characters are far from perfect and their actions aren't presented with any preachy moralising - the reader is left to come to their own conclusions.

There's also a balance in this novel of content which will appeal to different audiences - both in the simple male/female main character split but also in the balance of action and more cerebral content, with some elements particularly appealing to the more analytical part of the audience. It's funny, tense, and a fascinating look at some characters within this fictional world.