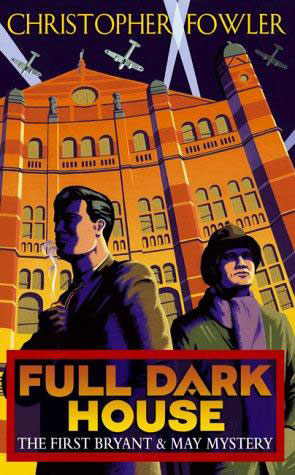 Arthur Bryant and John May of the Met's little-known Peculiar Crimes Unit are London's longest-serving detectives. When a bomb claims Bryant's life, it ends a partnership that has lasted for over half a century.

Desperately searching for clues to the killer's identity, May becomes convinced that the answer is to be found in their very first assignment together. It was in London, during the Blitz, and it all began when a beautiful dancer in a steamy new production of Orpheus in the Underworld was found without her feet.

The first novel in the Bryant and May series starts with an interesting twist - the death of the one of the principal characters. This event sets the remaining half of the duo off on a trip down memory lane, as he uses his recollections of the pair's first case together to investigate a modern mystery.

It took me a little while to get into the book - the first of Fowler's novels that I've read - but this may have been because I was distracted from reading it as quickly as I usually would. The plot is well told, revealing just enough throughout, and the author's ability to write two separate timelines consecutively, and keep it clear to the reader which they are in without it feeling forced shows this off perfectly.

I'll admit that there were parts of the structure that felt odd, but this might be because I've not read the author's earlier books which establish the characters in supporting roles. There didn't really seem to be a need for the split timeline framing story - the part set in 1940 could have easily stood by itself, and the 2003 storyline felt a little like padding.

Overall though I was pleased to finally read this having been recommended it a while ago by a friend. I was expecting something a little more wild from the 'peculiar crimes unit', but wasn't disappointed by what I found instead. Book two has gone on my wishlist.