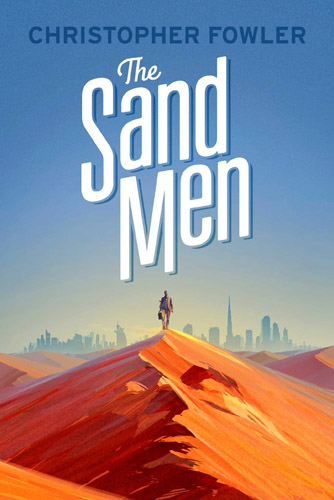 In Dubai there's a new world of high-luxury resorts emerging for the super-rich - but at what price to everyone else?

Lea, Roy and their 15 year-old daughter Cara live in a gated community reserved for foreign workers. Roy has been hired to deal with teething problems at Dream World, a futuristic beach complex. In the oppressive heat, the wives appear happy to follow behind their husbands, cooking and arranging tea parties, but Lea finds herself a virtual prisoner in a land where Western women are regarded with indifference and suspicion.

This is the first of Fowler’s books I’ve read outside the Bryant and May series, and I was slightly trepidatious. The cover reminded me of a book I recently read by another author, which was desert-based urban fantasy, and which I didn’t get on with. However I needn’t have worried.

It’s the story of a family - father, mother, and daughter - whose lives change when they move from London to Dubai, as the father obtains a job on a massive construction project. But of course this wouldn’t be a story if everything was as it seems.

There’s a familiar feel to the opening - a slight hint of dark fantasy that in the light of day becomes human agency. A mystery and paranoia, and a sense that you aren’t quite sure who to believe - particularly in this case as the narrative is very focussed on one viewpoint, with just hints that the other characters have quite interesting lives going on in parallel.

I felt the plot became more rushed as it went on, but that may be reflective of my variable reading pace. There was also a large chunk of narrative that confused me, and left me not knowing exactly what I was meant to believe was happening. As a result I’m not sure I felt the conclusion was satisfactory.