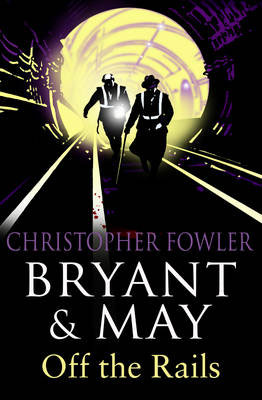 Arthur Bryant, John May and the Peculiar Crimes Unit are on the trail of an enigma: a young man called Mr Fox. But his identity is false, his links to society are invisible and his home yields no clues. All they know is that somehow he escaped from a locked room and murdered one of their best and brightest.

Now the detectives are being lured down into the darkest recesses of the London Underground where their quarry, expertly disguised, has struck again. Their search takes them into the vast labyrinth of tunnels, a subterranean world full of legends and ghost stations, which tie the city together. Edging closer to what lies hidden beneath the city - and to the madness that is driving a man to murder - Bryant and May are about to uncover a mystery as bizarre as anything they have ever encountered.

Bryant & May’s eighth adventure takes an interesting twist on the series, being the first novel that is a direct sequel to the preceding one. The continuing case of The Fox, who having escaped custody appears to have begun a new killing spree, and the detectives are once again given an absurdly short deadline to complete the case or be shut down.

While it’s a good mystery story, I felt that this one had lost a little of what earlier novels had. The crimes aren’t particularly peculiar in their nature - they are fairly ordinary as crimes go - and the character developments that have been at the forefront of previous stories seem to have been back-burnered in favour of plot.

The narrative is however quite amusing, in a relaxed way. There are a few in jokes, at the author and characters’ expense, as well as a number of moments of humour and particularly strong and witty dialogue. This I think was what held the book together and made me race through the pages, rather than anything with the plot itself.

A good mystery overall, with some interesting twists and turns, and a satisfying resolution.