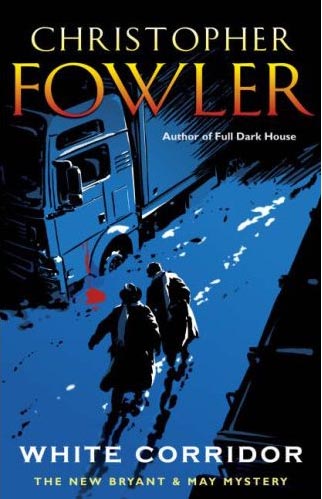 The unthinkable has happened at London's Peculiar Crimes Unit. In the bitter depths of winter, a member of the team has been murdered, and everyone who works there is a suspect. With the exception of Arthur Bryant and John May that is, for the eccentric detectives who run London's strangest crime division are stranded on a desolate snowbound road somewhere in the West Country on their way to a spiritualists' convention. As the snows worsen, Bryant & May attempt to solve the crime long distance. And their situation is about to get much. much worse. Unknown to the elderly detectives, an obsessed killer has travelled from the Riviera to Dartmoor, and is stalking the stranded vehicles, searching for one particular victim and edging ever closer with each passing minute.

I find the timeline of the Bryant and May novels somewhat baffling given that they aren't in chronological order, but this one has mobile telephones so I'm fairly convinced that it's set in the modern day. It's an interesting if slightly bizarre story that follows the main police officers as they head to Plymouth for a spiritualist convention, their team as they investigate a death that's a little close to home, and a mother and son running away.

Somehow this all comes together in an entertaining plot that all makes perfect sense at the end of the day. The story moves at a good pace, surprising really given that it feels like it should be slow as there's not a massive amount of action, and as usual includes various unexpected twists and loose threads that are left dangling for future stories.

One of the nice things about this story was spending some time with the junior officers, and getting to know them better rather than sticking with the main characters, who in my head have now settled down into the images of Mainwaring and Wilson from Dad's Army.

Overall a really good mix of plotlines that I enjoyed reading. I love that I can't know what to expect with each book in this series and that they can continue to surprise and delight me, and I look forward to more of the same.