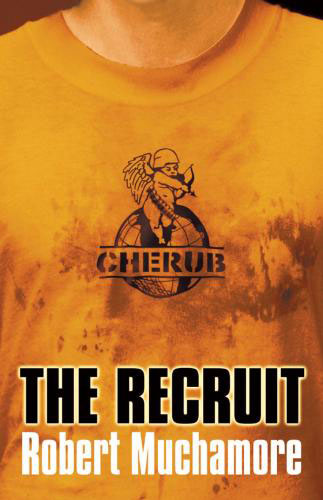 A terrorist doesn't let strangers in her flat because they might be undercover police or intelligence agents, but her children bring their mates home and they run all over the place.

The terrorist doesn't know that a kid has bugged every room in her house, cloned the hard drive on her PC, and copied all the numbers in her phone book. The kid works for CHERUB.

The Recruit is the first book in Robert Muchamore's CHERUB series, about a school for orphans who work as spies for the British government. It sounds like a strange cross between James Bond and Harry Potter, but actually comes out baring little resemblance to either.

The plot is a little slow to get started - I think I was expecting a little less setup before the action begins, but once things got moving I found it hard to put the book down. There are three clear chunks to the narrative, but by the end it does feel that the final section became a little rushed.

I'm not entirely sure what age reader this book is aimed at - the main character is 11, which normally would suggest a target audience of around 8, but I felt that the language and the violence portrayed were more appropriate for a maturer readership. The main character is not always a likeable person, and gets up to things that parents would be reluctant to have their children emulate without much comeuppance or moralising. This might make it more appealing to young readers though.

Personally, I didn't think that The Recruit was as entertaining as Anthony Horowitz's Stormbreaker (first book of the Alex Rider series), but as first books go it was not bad. I will probably follow it up by getting the sequel. Final advice - perhaps read it first to check you think it's suitable for your child.