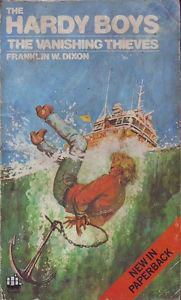 Hardy Boys adventure 66 sees a visit by Chet’s cousin lead the brothers and their friend into my one but four separate cases, taking them on a trip to Los Angeles.

The book feels pretty standard for the early 80s formula, although high on violence and peril. I’ve noticed that the boys are much more inclined now to break laws themselves in the course of their investigations, and I counted five incidents of unlawful entry in this novel.

Overall I think it’s a mediocre plot, nothing hugely exciting or memorable. It’s certainly the case that I don’t recall this one from when I read it as a child.

There are several sexist moments to the narrative that would hopefully be avoided in a modern story, and what appears to be potentially a racist illustration in my copy. That said, likely the most noticeable thing that would be implausible to a modern child would be the total absence of mobile telephones.