The Clue of the Hissing Serpent 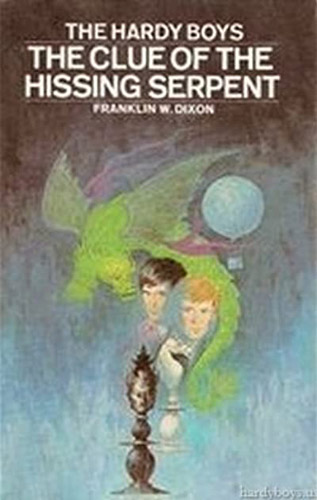 Why is a wealthy sportsman so frightened by the serpent design on a mysterious balloon that he begs Frank and Joe Hardy to protect him? And who stole the ancient life-size chess king which is to be presented to the winner of the world chess championship? Targets of diabolical enemies, Frank and Joe find a clue that leads them across the Pacific to Hong Kong to help the police smash an international criminal organization.

As we near the end of the original series of Hardy Boys novels, we find them following Chet as he takes up another hobby - ballooning.

This is a mix of the classic style - maybe the first half retaining the local mystery aspect - and the newer style of global travel that the series adopted in the 1970s.

Unfortunately it’s the second half that brings it down, particularly a rushed ending and what had to be the lowest moment in the series so far where the boys commit their own shocking offence and then brush it off in a way that I totally couldn’t as a reader. I am actually disturbed that they were able to go that far.