What Happened At Midnight 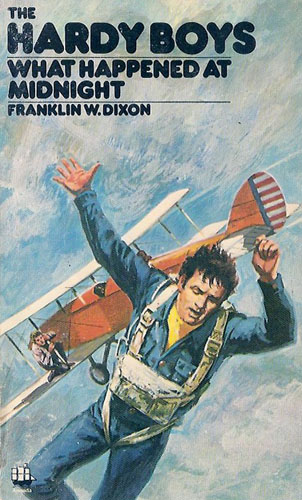 Frank and Joe Hardy's efforts to retrieve a top-secret invention from a scientist's house in Bayport leads them to a mystery involving a dangerous gang of jewel thieves and smugglers.

So many things happened at midnight that it almost feels like this started life as a title looking for a plot (which is actually quite plausible given that my copy was of the rewritten 1967 text). The tenth book in the original (rewritten) Hardy Boys series finds the two characters given a mission by their father to break into a house and steal a new invention - this at least makes for an interesting twist as we end what are apparently considered the best of Hardy Boys fiction.

There are some nice moments in this story - particularly for Frank - which I enjoyed, and a trip to New York which added some colour and helps to stop the series becoming too samey. On the other hand though we revisit a number of tropes of the series already - boats, planes, cars, fights - all things that the series started without and has already picked up like bad habits.

This is an average story in the series and probably not one that stands out - I can't imagine the title will remind me of what happened in this one in a few days, let alone months or years like some of the other stories.