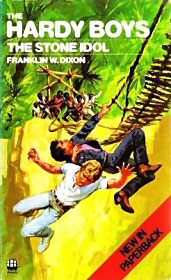 This early 1980s Hardy Boys novel sees the brothers hired to investigate the theft of a small state originating from Easter Island.

In many ways, it fits the mould of the series, with the boys going off on exotic travels, helping out their father, and adopting offensive amounts of disguise as natives from other cultures.

But in others it doesn't - there are elements here which feel quite unique and like the author has put in some effort to deliberately avoid hat have become liches of the series.