Night of the Werewolf 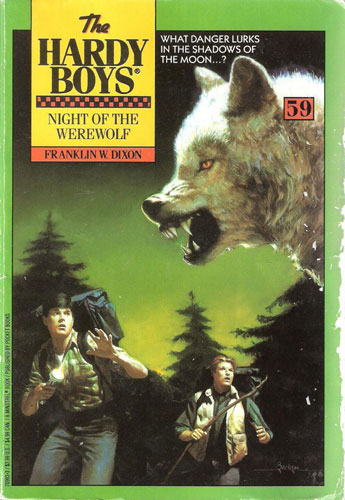 A ferocious, wolf-like creature appears during the night of the full moon in a small Adirondack town, attacking livestock and scaring many of the residents.

The first of the Hardy Boys digests doesn’t seem to depart much from the adventures that came before. This time the brothers travel north to help investigate for a family who believes one of them may be a werewolf, which is one of the more outlandish suggestions they have faced but seems to be something that’s considered reasonably plausible.

Many of the standard elements are present, including a solid dose of dated racism, and a lot of weight shaming. The number of times that new characters recognise the boys’ names has now reached the level where the author has to be parodying the series and the publisher just hasn’t noticed.

The plot is a bit weak, quite confusing, and at one point made me crack up at how absurd a plot point was in not having been mentioned earlier.