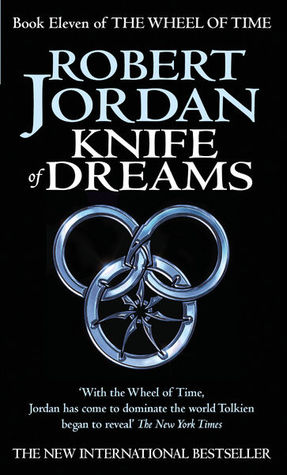 Rand must negotiate a truce with the Seanchan armies, as their forces increasingly sap his strength. Perrin has made his own desperate truce with the Seanchan - he would deal with the Dark One himself to save his wife Faile from the Shaido. Meanwhile, Mat is caught up in a reckless escape from Ebou Dar with the kidnapped Daughter of the Nine Moons.

Book eleven is, in my opinion, one of the best in the series. It's nice to know that Jordan went out on a high, as this is the final instalment that he completed before his death. Mat tries to escape the Seanchan tracking him, Perrin fights to regain his wife from the Shaido, Elayne fights for her crown and Egwene adapts to life as a prisoner of the Tower.

Its a good book because the plot advances at a reasonable pace. It's far from fast, but that's not what you want from an epic on this scale. Plenty of time is taken over the characters and their environments, but stuff continues to happen.

It is clear now that Jordan is getting things ready for the end of the series. Several key storylines that have twisted through the past few volumes are wrapping up, but a few surprises appear. The different groups of characters are beginning to move back together again, and I'm hoping this means an end is in sight to the lack of communication that has interfered with so many of their plans so far.

My earlier criticisms of plot-lines existing purely to keep characters occupied now seems unfounded, as each has grown, presumably in a way that will bear fruit come the last battle. Despite this, the same appears to occur now to Aviendha, who is quickly shunted out of the way. Rand himself suffers again from a fairly limited amount of page time as well which would have been frustrating if the others had not been so interesting. The only other fault in this vein was hat Egwene's story did not continue into the latter half of the book.

As I said, a good farewell to an excellent author. I can only hope that Brandon Sanderson can finish the story off just as well.