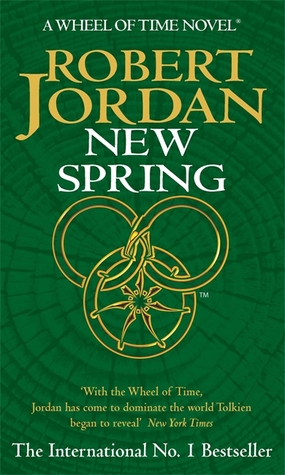 The city that greets Al'Lan Mandragoran, exiled king of Malkier and the finest swordsman of his generation, is instead one that is rife with rumour and the whisperings of Shadowspawn. Proof, should he have required it, that the Dark One grows powerful once more and that his minions are at work throughout the lands. And yet it is within this city's walls that Lan will meet a woman who will shape his destiny.

This has actually surprised me by how good it is, and is probably my favourite book in the whole series (so far). It's a refreshing change to the ongoing storyline that we're plodding through in the main series, but is still a part of the same story which gives an excellent insight into the backstory.

This book tells the story of Moiraine, and how she and Siuan begin on their mission to find the Dragon Reborn. It covers some of their time as Accepted in the White Tower - a situation we have not seen much of in the main series. It also delves a little into Lan's backstory, and how he and Moiraine meet.

The characters are excellently portrayed - they are visibly the same characters that we've come to know twenty years later in the books so far, but with an element of youth which allows the reader a much better view into the workings of their minds. The only one I think was not particularly well depicted is Lan. His story is short and fragmented and shown through his thoughts rather than his actions, which a lot of the time mean there is not enough detail to understand what has happened.

The world itself is slightly different from the one we have come to know and it's fascinating to see how it has changed in the following decades. There are also a few little hints that the reader will pick up upon, and characters mentioned in passing that we know will return in the future.

It's a short book, at least on the Wheel of Time scale, but that certainly does not detract from it's value. I very much enjoyed it, and hope that this will continue in Jordan's last book in the series, Knife of Dreams.