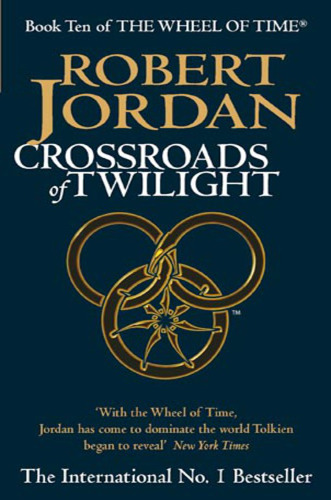 Rand al'Thor, the Dragon Reborn, must fight on against the Dark One in a stuggle that has drawn an entire world into its vortex - claiming the souls of friends and enemies alike. He has cleansed the taint of madness from the male half of the True Source, so may now draw on its power as a weapon of awesome potential.

I've heard bad things about this book, and because of this I was pleasantly surprised that it wasn't anything like as bad as has been made out. Okay, so not a great deal happens in terms of advancing the plot, but it's not an awful book. This is however from the perspective of a reader who could, if so inclined, pick up the next volume immediately - perhaps I would think differently if I knew I had to wait several years for the next instalment.

This book mostly focusses on what I think of as the second rank of characters - Rand is the first rank - dedicating each of Perrin, Mat, Elayne and Egwene a sizable chunk each, taking their storylines from slightly before the end of the previous book and advancing them a little. I quite like that each character has their own chunk, rather than being interspersed with the others, as it helps me not to lose track.

The majority of the action comes in the last few chapters though, when we flick around the characters a little, and events begin to occur a lot more quickly. Mostly however this book does feel like a bit of a gap filler - but that doesn't make it bad from my perspective. It's still just as well written, the characters are almost truer in this book than in a number of others, and so I'm happy. Yes, it's a pain that not a lot has happened and now I've got the prequel to read before getting back to the main story, but I actually don't mind.