The Fires of Heaven 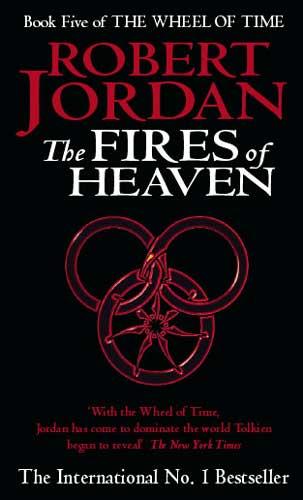 The bonds and wards that hold the Great Lord of the Dark are slowly failing, but still his fragile prison holds. The Forsaken, immortal servants of the Shadow, weave their snares and tighten their grip upon the realms of men, sue in the knowledge that their master will soon break free. Rand al'Thor, the Dragon Reborn, knows that he must strike at the Enemy, but his forces are divided by trachery and by ambition.

In the fifth novel in this series Rand is forced to step up his plans to start invading the rest of the world, while the two groups of girls try to find their way to a safe haven.

This book doesn't have the extremely slow start of the previous episode, although there is a bit of an odd jump between the events of the two. This is particularly noticeable in the Nynave and Elayne storyline which seems to have skipped a rather important escape scene.

There were a lot of unexpected twists in this one, including learning some of the things which were kept secret from us in the previous novel... even though they were fairly obvious to see coming. I was disappointed that one of the characters was completely ignored in this book, especially after his major storyline in the last one, which I really enjoyed.

Overall this was another good book, but I probably wouldn't go as far as saying that it was as good as book four.