The Way of Kings (part one) 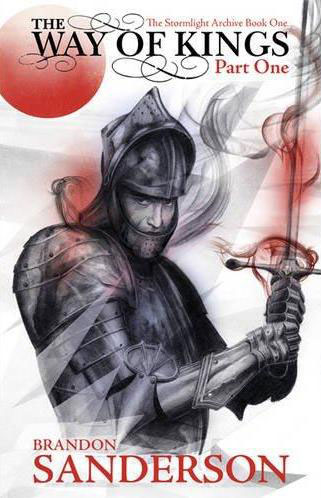 According to mythology mankind used to live in The Tranquiline Halls. Heaven. But then the Voidbringers assaulted and captured heaven, casting out God and men. Men took root on Roshar, the world of storms. And the Voidbringers followed. They came against man ten thousand times. To help them cope, the Almighty gave men powerful suits of armour and mystical weapons, known as Shardblades. Led by ten angelic Heralds and ten orders of knights known as Radiants, mankind finally won. Or so the legends say. Today, the only remnants of those supposed battles are the Shardblades, the possession of which makes a man nearly invincible on the battlefield.

After many years of waiting on my bookcase, I have finally picked up this first book in the Stormlight Archive series, by one of my favourite authors. I’ve only been putting it off while I read through pretty much the entire rest of his output, as this series is one that is ongoing and I didn’t want to feel I would have too long to wait for additional entries.

My paperback copies of The Way of Kings are split into two volumes, and as with previous novels where this has been the case, I’ve chosen only to read the first half, then take a break and read some other things before returning to part two.

I found the story a little harder than expected to get into - it feels a little more formal and grandiose than some of Sanderson’s other work, and I’m not sure if this is a deliberate style choice (likely, as he does like to plan these things) or a side effect of this being his masterpiece and him subconsciously changing the style). The reader is dropped in quite quickly to several different characters and understanding and becoming used to them takes a while.

Once in though, this is another great book. The characters are rich, deep and rewarding. Their backgrounds and personalities varied and fascinating, with hints of more to be revealed, and it doesn’t take long to fall in love with them and want to follow their stories forever.