The Way of Kings (part two) 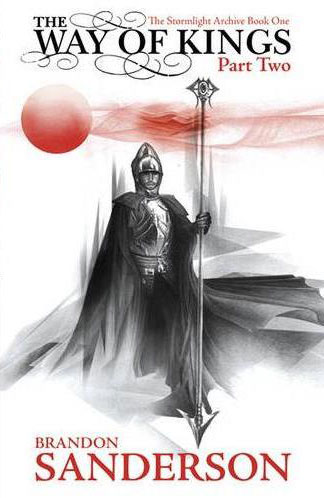 The entire world is at war with itself - and has been for centuries since the Radiants turned against mankind. Kings strive to win more Shardblades, each secretly wishing to be the one who will finally unite all of mankind under a single throne. On a world scoured down to the rock by terrifying hurricanes that blow through every few days is a young spearman, forced into the army of a Shardbearer, led to war against an enemy he doesn't understand and doesn't really want to fight. What happened deep in mankind's past? Why did the Radiants turn against mankind, and what happened to the magic they used to wield?

The second half of The Way of Kings, the opening book of Brandon Sanderson’s epic series, feels very much like the second half of a book (which of course it is). This means that it's fast-paced, with a lot going on, and next to no introduction. It's like getting to the unputdownable part of a book from page one.

It continues the stories of three main characters, interwoven as their civilisation takes part in a massive war. One is the warlord, another a slave, and the third a con artist, but none of them quite fit into the roles that life has cast them in.

The book over both volumes is split into five sections, and different sections focus on different selections of the main characters. This is a tad frustrating in places because the reader is left for a considerable number of chapters to find out what’s happening to one of your favourites. But that’s hardly a terrible thing.

I absolutely adored this half of the book and am desperate to pick up the next one in the series.