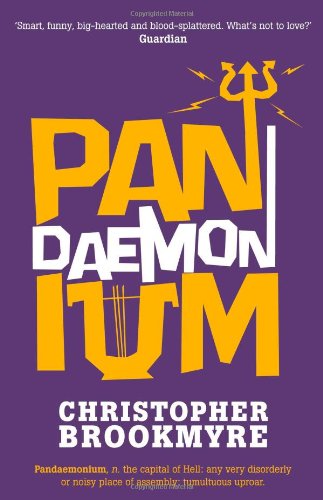 The senior pupils of St Peter's High School are on retreat to a secluded outdoor activity centre, coming to terms with the murder of a fellow pupil through the means you would expect: counselling, contemplation, candid discussion and even prayer - not to mention booze, drugs, clandestine liaisons and as much partying as they can get away with. Not so far away, the commanders of a top-secret military experiment, long-since spiralled out of control, fear they may have literally unleashed the forces of Hell. Two very different worlds are on a collision course, and will clash in an earthly battle between science and the supernatural, philosophy and faith, civilisation and savagery. The bookies are offering evens.

Christopher Brookmyre's final comic novel before his switch to more serious crime writing. The plot is a combination of the best bits from some of his previous books, including the computer game metaphors from A Big Boy Did It..., the setting from Be My Enemy, the school-age characters from A Tale Etched... and themes from ... Unsinkable Rubber Ducks. You'd think that such a recycled plot might feel awkward but it really does make something more than the sum of its parts.

A group of Scottish teenagers are taken on retreat after the deaths of two fellow-pupils at their Catholic school - meanwhile, deep underground, the church and the US military have opened a hellmouth and it's only a matter of time before the demons get loose.

There's a surprising richness to the rather large cast of characters that makes it all the more believable - none seem to be particularly focussed on as a protagonist which means that all get the chance to have their personalities explored in depth as they are thrust into some rather unusual circumstances.

Violence and gore are to be expected from Brookmyre, and this novel fails to disappoint, and I was entertained by the impressive amount he manages to squeeze in. There are also a lot of more tender moments where the characters reflect and learn things about themselves.

Brookmyre is clearly on the top of his game with this book and I'm only upset that I have now read all his comic works and have no more to look forward to.