Attack of the Unsinkable Rubber Ducks 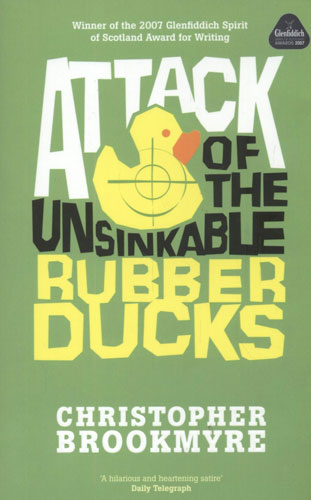 Do you believe in ghosts? Do we really live on in some conscious form after we die, and is that form capable of communicating with the world of the living?...

That was Jack Parlabane's stance on the matter, anyway. But this was before he found himself in the more compromising position of being not only dead himself, but worse: dead with an exclusive still to file.

This has to be the best of Christopher Brookmyre's novels that I have read. In his surprise new post as Rector of Kelvin University, Jack Parlebane becomes involves in an experiment into psychic abilities, something he doesn't believe in... until things start to get weird.

I raced through this book in a couple of days. The plot was gripping and surprisingly believable given the subject matter. It is an unusual presentation from Brookmyre, and I must admit it kept me guessing for some time. There was one plot point that I saw coming, but my feeling is that the whole book had been leading me towards it and that the author's intention was for me to pick it up when I did rather than when the big reveal came along later.

It differs from previous Jack Parlebane novels in a number of ways, the most obvious being a lack of swearing, gore, and strong Scots dialect, all of which gives it a more authoritative and less comedic tone. It is told in the first-person, but from three main viewpoints, which at times appears deliberately confusing as you don't know at the start of each chapter which of the characters you are on board with. The new characters are all strong and well-rounded and I especially liked the many slightly geeky references.

Overall I found it to be a really enjoyable and even educational book and would certainly recommend it, although there will be those readers who won't be satisfied by how it all turns out at the end.