Where the Bodies are Buried 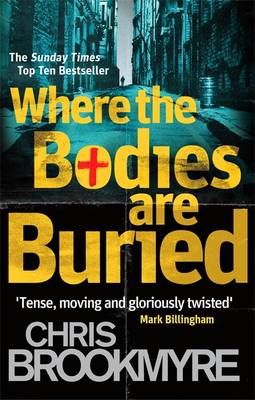 A city in the throes of a new drug war.

A police force on the verge of tearing itself apart.

A ruthless hitman back from the dead.

A shattering secret hidden for decades.

Known for his series of comical crime novels, Chris Brookmyre takes a new direction with Where the Bodies are Buried, his first 'serious' crime book. Josephine Sharp is an out-of-work actress temping as a trainee private investigator for her uncle's company, when Uncle Jim goes missing, leaving her to retrace his movements.

Despite this novel's grittier and more realistic (less larger-than-life) tone the style of Brookmyre's writing remains the same and glimpses of his usual wit remain. An interesting and touching theme of family runs alongside the investigative plot making all the characters much more relatable than the traditional single alcoholic male investigator who usually populates crime novels.

The depth of the characters is almost surprising, all of them are well fleshed-out with fairly detailed back stories and plenty of hints of more secrets to perhaps be revealed in a sequel. Whereas your run-of-the-mill crime novel only pays attention to the main character, Brookmyre's ensemble cast gets his usual equal treatment and it feels as if every single one is deliberately thought through.

While the style is clearly descended from that of his earlier novels, a number of aspects are toned down - the violence, the sex, the Scots dialect. Overall it makes for an absolutely smashing book which I've really enjoyed. Brookmyre remains one of my favourite writers, and his jump to serious crime novels is certainly a success.