The Man in the Brown Suit 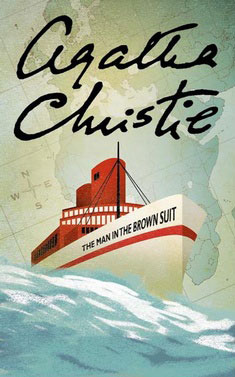 Pretty, young Anne came to London looking for adventure. In fact, adventure comes looking for her - and finds her immediately at Hyde Park Corner tube station. Anne is present on the platform when a thin man, reeking of mothballs, loses his balance and is electrocuted on the rails. The Scotland Yard verdict is accidental death. But Anne is not satisfied. After all, who was the man in the brown suit who examined the body? And why did he race off, leaving a cryptic message behind: '17-122 Kilmorden Castle'?

This early Agatha Christie mystery was a refreshing return to her writing after I completed my read-through of the Poirot novels some months ago. It’s a slightly complex plot which sees a young woman find herself by chance investigating a crime that leads her on quite an adventure.

There are a lot of the hallmarks of classic Christie, and yet also quite a different feel in places. The pace feels fast, and the setting changes constantly, whereas many of those I’ve read before have been geographically static.

There are lighthearted and even comedic elements, and it seems obvious that the writer is having some fun in putting the characters and story together.

Ultimately it felt something lacking though. Possibly the mystery was too complex, or not quite explained in such a way to make me feel I had reached a satisfying conclusion.