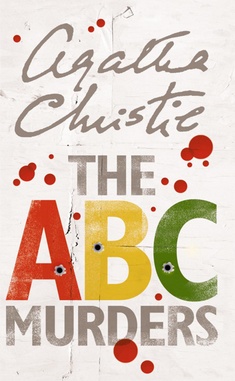 There's a serial killer on the loose, bent on working his way through the alphabet. And as a macabre calling card he leaves beside each victim's corpe the ABC Railway Guide open at the name of the town where the murder has taken place. Having begun with Andover, Bexhill and then Churston, there seems little chance of the murderer being caught - until he makes the crucial and vain mistake of challenging Hercule Poirot to frustrate his plans.

This Poirot novel, narrated by Captain Hastings, differs somewhat from the norm. The killer has written to Poirot to announce his act in advance, and so the famous detective joins the hunt.

This is an interesting book, as Hastings chooses to narrate some of the action in the third person - something he's not done before - which I initially found quite an odd move on Christie's part, as it distracted from the flow, and by telling the reader about the murderer removed us from the mystery of who done.

This has to be one of the best Poirot books in the set. The action moves at a good pace and there is a wide range of characters who avoid the usual stereotypes. Christie even drops in a few in jokes about detective fiction. The plot is surprisingly complex and lulls the reader into a false sense of security - and though my thinking towards the end was close to the concussion, I failed to work things out before the big reveal.

A good entry in the series, and something nice to quickly read and get me back into a reading mood after some disappointments.