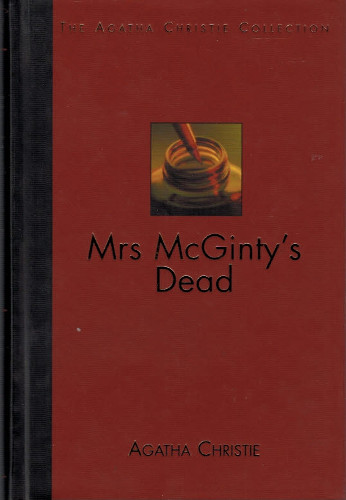 Mrs McGinty died from a brutal blow to the back of her head. Suspicion fell immediately on her shifty lodger, James Bentley, whose clothes revealed traces of the victim's blood and hair. Yet something was amiss: Bentley just didn't look like a murderer.

It's been quite a while since I last read an Agatha Christie novel and I'm pleased by what I got on my return to the world of Hercule Poirot and Ariadne Oliver. When the police arrest a man they believe to be innocent, yet to whom all the evidence points, they call on an elderly Poirot to find the truth.

It's a classically complex tale of a rich tapestry of suspects and clues which could point various directions, and which had me fairly baffled almost throughout. At one point I did suspect the truth but only fleetingly amongst a number of other possibilities that I was bombarded with.

This is one of the examples of a novel that Christie has filled with humour, often making herself the butt of the joke, and the amusement it gave nicely balances parts that could come across as brutal (although perhaps not compared to crime novels of the modern day). The comedy absolutely makes the book, and I really loved this aspect, which is often forgotten, of her writing.