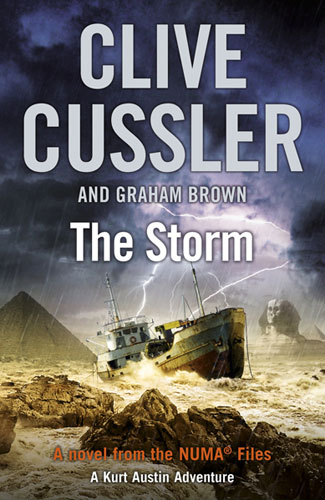 In the middle of the Indian Ocean, a NUMA research vessel is taking water samples at sunset, when a crew member spots a sheen of black oil ahead of them. But it is not oil. Like a horde of army ants, a swarm of black particles suddenly attacks the ship, killing everyone aboard, while the ship itself goes up in flames.

A few hours later, Kurt Austin and Joe Zavala are on their way to the Indian Ocean. What they will find there on the smoldering hulk of the ship will eventually lead them to the discovery of the most audacious scheme they have ever known: a plan to permanently alter the weather on a global scale. It will kill millions, and it has already begun.

The Storm is Graham Brown's second outing as Clive Cussler's co-author since taking over the NUMA Files series from Paul Kemprecos. I enjoyed Brown's previous book and was looking forward to more from him - I was not disappointed.

When a small NUMA science vessel shows up burnt, with no crew, and all the lifeboats still aboard, Kurt Austin and the team are dispatched to investigate. Although it has weak moments, its one of the better recent Cussler-brand stories, with the science actually believable rather than the fantastic events of some earlier books.

Once again Brown's strength is in the characters - Austin is clearly the star of the show, but he's developed much more depth since Brown took over, and I've particularly enjoyed his portrayal of the Trouts - they seem to have a much more 'couple-like' dynamic than we've seen before and this really helps make the setup feel more believable.

The plot moves along at a good pace, although I'm beginning to get fed up with the focus the Cussler-verse has had on middle-eastern terrorists in recent years. Clearly this is an easy supply of plots but it's starting to feel lazy rather than imaginative. There are a couple of plot-holes though and implausibilities, and I even found myself disappointed that some of the regular supporting characters didn't make an appearance.

I certainly think the series has picked up with the new author, and I've pulled back from my feeling of a few years ago that I might give up on Clive Cussler's works. It's not perfect, but it's good enough for a short diversion.