The Song of the Quarkbeast 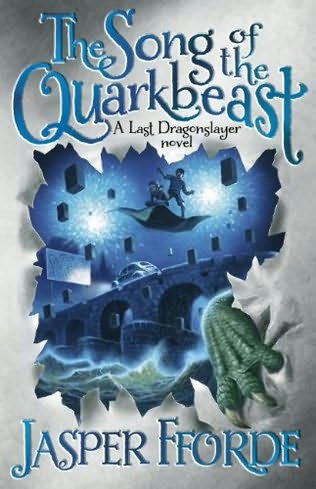 A long time ago magic faded away, leaving behind only yo-yos, the extremely useful compass-pointing-to-North enchantment and the spell that keep bicycles from falling over. Things are about to change. Magical power is on the rise and King Snodd IV of Hereford has realised that he who controls magic controls almost anything. One person stands between Snodd and his plans for power and riches beyond the wildest dreams of avarice. Meet Jennifer Strange, sixteen-year-old acting manager of Kazam, the employment agency for sorcerers and soothsayers.

The sequel to The Last Dragonslayer just lives up to the promise of its predecessor. Jennifer Strange, acting manager of Kazaam - a magic company - is getting ready to rebuild Hereford's history bridge, but iMagic, their closest competitor, have something different planned.

The book had, I felt, a relatively weak opening. Fforde's recent works, particularly Shades of Grey and The Last Dragonslayer, have been masterpieces, and to be honest this felt like a bit of a let down after those. However once some of the set up had been passed, the pace picked up and Fforde's unique surrealism began to show itself again and for the second half the novel was easily the equal of its predecessor.

The nature of the story though does make it feel more of a children's novel, though perhaps that is by design. The first book in this series appealed to me as an adult reader, in that it dealt with some weightier themes which this book barely brushes against.

Overall though certainly another good book from Fforde and I will continue to look forward to his works with a sense of glee. His mastery of the English language has to be up there with the greats of surreal and humorous writing.