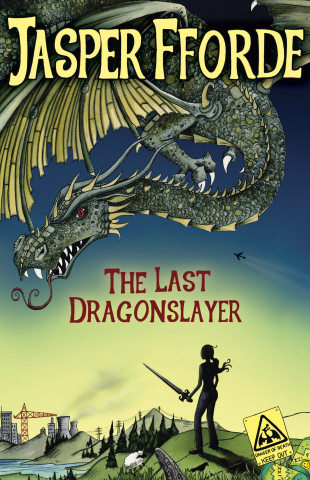 Fifteen-year-old Jennifer Strange runs Kazam!, an employment agency for soothsayers and sorcerers. But work is drying up. Drain cleaner is cheaper than a spell, and even magic carpets are reduced to pizza delivery.

So it's a surprise when the visions start. Not only do they predict the death of the Last Dragon at the hands of a dragonslayer, they also point to Jennifer, and say something is coming.

Jasper Fforde's latest novel tells the story of Jennifer Strange, fifteen-year-old acting manager of a wizard employment agency, which is suffering due to lack of magic. When the death of the last of the dragons is predicted, it is to her that people come looking for ways to profit.

Fforde's writing style is easily recognisable and easy to fall back into reading. It's a comfortable and friendly read that reminds me of the pleasure I've received from his previous works. His writing gets better and better, this and Shades of Grey demonstrating a master at work.

While it is technically a children's novel, this book has none of the patronising and simplistic nature of many examples of the genre. The world Fforde constructs is just as detailed, if a little less complex, than in his other novels, with a rich range of characters, animals and alternative history. The book will appeal just as much to adults as to children - especially with the dragonhide texture of the dust jacket!

I actually find that I have no criticism to make. The story does contain morals, the classic hallmark of the children's book, but Fforde has no qualms in bending them when necessary to make his fantastical setting seem real. I'm very glad that there is plenty of opening for a sequel to be very different.